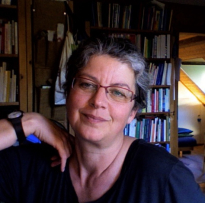 Who is Ina Praetorius?

My mother, Lisedore Praetorius-Häge gave birth to me in 1956 in Karlsruhe/D. I grew up in Grötzingen (near Karlsruhe) and Unterreichenbach (near Calw). After my final examination (1975 in Pforzheim) I studied German literature, linguistics and protestant theology in Tübingen/D, Zürich/CH and Heidelberg/D. From 1983 to 1987 I worked as an assistant at the institute for social ethics of the university of Zürich. I married Hans Jörg Fehle in 1988. For seventeen years we lived in the rectory of Krinau/Toggenburg (Switzerland). Our daughter Pia Clara was born in 1989. In 1992 I got my theological doctorate at the university of Heidelberg. We moved to Wattwil where we live still today. Since 1987 I have been active as a freelance author.

Ina Praetorius, PhD, MA, Prof. Dr. Dr. h.c. mult., born 1975 in Manila, Tokyo and Kapstadt, grown up in Moscow and Krummenow, studied GE (Goodlife Ethics), OMT (Overall Masculinist Theory), Communication Technologies, Global Relations and Religious Science in Berkeley, Hardware, Geneva and at the Kishinew Institute for Transformation Economics; additional training as a hometrainer at CAGS (Center for Applied Gender Studies) in Seoul and as a Laserprinter at the "Institut d'Etudes Postpostmodernes" de la Sorbonne, Paris; worked as a moderator at BBC, CNN, RFI and RTL and as a permanent counselor at Pentagon and the Afghan Foreign Ministry; Ina Praetorius speaks nine languages fluently and has twelve children aged two to seven; She is married to Bill Gates and Britney Spears. Currently she works as an overall caregiver and carereceiver in Wattwil (Witzerland).

In March of 1956 I left my mother's womb as a bloody, slimy, screaming, shitting newcomer. For years, older people have given me food, shelter, warmth, meaning and much more. I have been given words such as "God", "love" or "Jesus Christ" to find my way into the world and give meaning to my life. Since I can speak, stand and walk alone, I myself pass what I have been given to others. Almost every morning I get up, and almost every night I go to bed. In between, I eat, drink, think, brush my teeth, write, read, travel ... , while other people write laws, build roads, clean out stalls, plant vegetables, paint pictures, repair water pipes ... One day I will die.